According to the Ra Material our planet is at the end of a major 75000 year evolutionary cycle called 3rd Density and beginning the 4th Density cycle. This 75000 year cycle consists of 3 minor precession cycles of 25000 years and this precession of the Vernal Equinox is now entering the Aquarius sign so hence the term Aquarian Age.

The Aquarian Age and 4th Density coincide and mark a quantum jump in evolution and is astrologically enhanced and signified  by an unprecedented series of seven exact square transits between Uranus (in Aries) and Pluto (in Capricorn) from June 24, 2012 to March 17, 2015. Intense and high level catalytic energy to awaken both the individual and collective conscious.

It's unprecedented because these are very intense revolutionary planet archetypes in strong cardinal signs  which intensifies their effect. Also because these two planets in these particular signs have not occurred since circa 1166 BC where they made three exact squares and previous to that in circa 1422 BC where they made five exact squares. During those times there was some indication of revolutionary movement ie the Hebrew Exodus out of Egypt circa 1425 BC.

Here is a graph of my version of the relative intensity of change of the next few years of this ongoing transit. As a reference consider last year's Arab Spring and OWS as a 35 percent level of intensity. And these events occurred without Uranus and Pluto in exact square aspect although within close enough range to signify unrest and upheaval.

I posted  a Romney "Meltdown" chart with transits and progressions at the Ron Paul forums a few days ago and it is beginning to manifest as forecast. Exposure of corruption and fraud and legal action are taking hold based on news at the forums. All indicative of revolutional changes. Here's the chart. 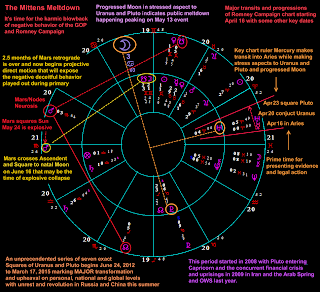 Posted by Mike for the Revolution at 3:30 PM No comments:

There's not much traffic and discussion there so this blog may play that role to make others aware of the significance of the Ron Paul Revolution which is part of the larger global shift that has been called the Aquarian Age of spiritual evolution.

Here's an artistic version of Dr. Paul's personal chart made a couple weeks ago and based on a rectified birth time of 7:45 AM for August 20, 1935 in Green Tree, PA. 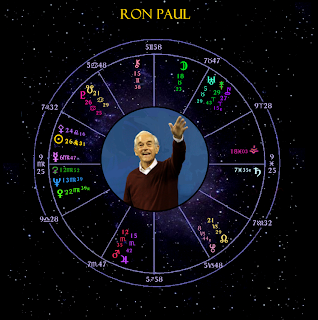 Another chart is the 'Campaign Chart' for when Ron Paul announced his run for president. In my view it is quite compelling in how accurate it portrays the Revolution Movement. This chart was made and posted in February and has only a few sketched out notes placed on it to appeal to the non-astrology reader. 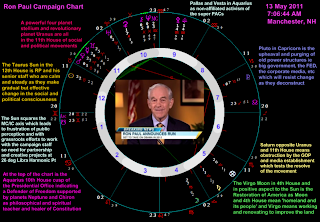 Posted by Mike for the Revolution at 1:21 PM No comments:

Mike for the Revolution
My main interest is in helping with the global transition called the Harvest or the Aquarian Age and using astrology as one tool of many to do this.